On time for your favorite competitors !

On the eventing side, experienced riders have been defending the French colours like Mathieu Lemoine (Olympic team champion) or Maxime Livio (winner in 2016). They have however had fierce competitors like the world champion Rosalind Canter or the current world n.1 Tim Price. And do not forget Alexander Bragg, Gemma Tattersall, Andreas Dibowski, Sarah Bullimore, Ludwig Svennerstal, Izzy Taylor, Michael Owen and others… The British rider Tom McEwen has finally won the competition ahead of all them ! Click here to see the master list

On the driving side, the test event before the 2020 World championships has attracted the best drivers. Marion Vignaud has been defending her 2018 title, but she may have had a tough competition with the world vice-champion Saskia Siebers and many top 10 drivers. The Belgian driver Laure Philippot won the individual competition, and the French the team contest.  Click here to see the CAIO 4* H1 master list

All our team is currently working to prepare always more technical and spectacular fences, directed by our course designers Pierre Michelet (CCI 5*) and Jacques Tamalet (CAIO 4*). 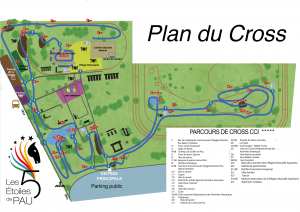 A beautiful competition ! Congratulations to Tom McEwen (GBR) who won the CCI-L 5*, and to Laure Philippot (BEL) and the French team who won the CAIO 4* H1 !